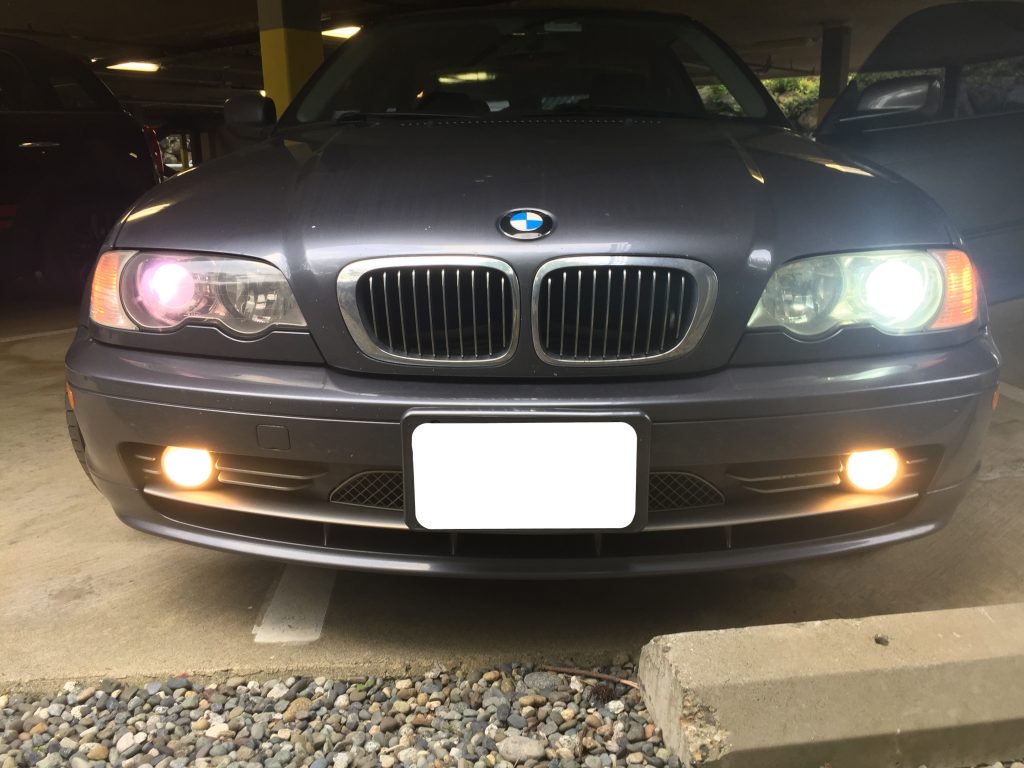 Remembering back to reading I’d done years ago, I initially was apprehensive about attempting a repair myself. The whole system is more complicated than a normal halogen setup, so I wasn’t even certain what the root cause was. Rather than repairing myself, I planned to have my mechanic take care of it for me. But, when I saw that the list price on GetBmwParts.com for the replacement bulbs was around $200 each, I feared I’d spend somewhere close to $500 for the repair, that is, if the bulbs were the issue. Absolutely absurd, especially considering replacing headlights on any other car has never cost me more than around $50 for the pair. In fact, on my Civic, the last time I replaced a bulb, it was $10.

So, I set out to figure out if I could troubleshoot the problem and fix it myself. One of the advantages of having a car that’s more than 15 years old is the abundance of content available online. I found a helpful thread on E46 Fanantics with troubleshooting instructions. The first step: swap the left and right bulbs to see if the problem followed.

And then for replacing the bulb:

When I removed the bulb from the side which was discolored / dimmer, I noticed a small crack and figured that the issue was, indeed, the bulb: 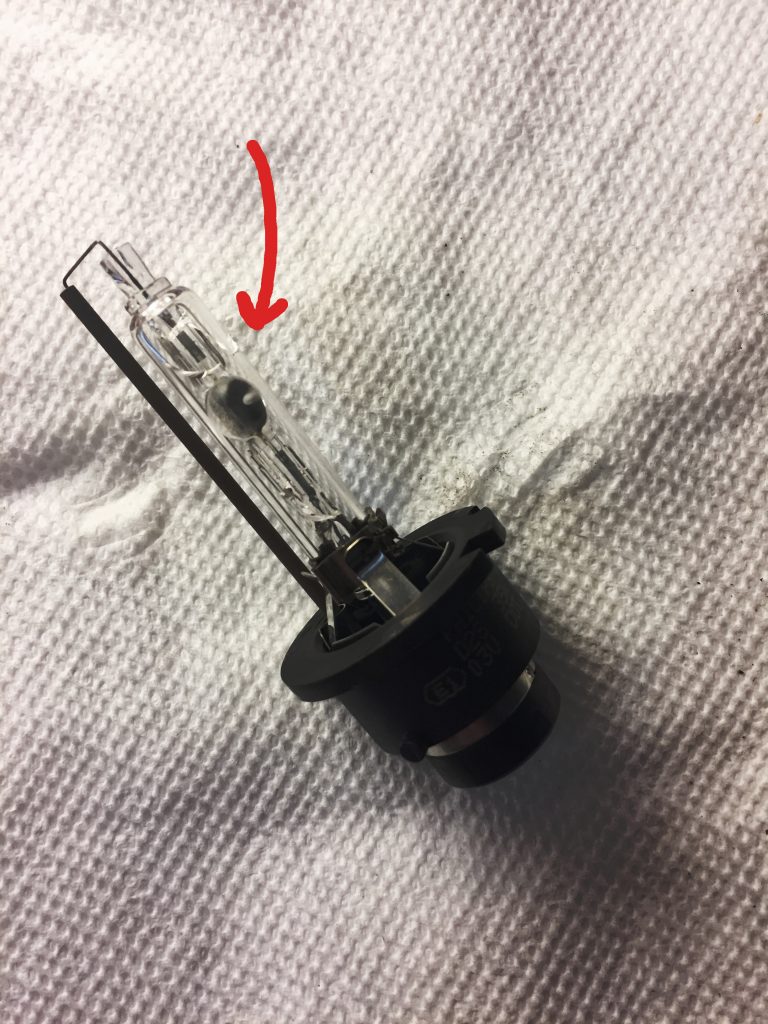 I swapped the driver’s side and passenger’s side bulbs to confirm, and the problem followed. Conclusion: the bulb needed to be replaced.

From my reading online (especially the E46 Fanantics post), I gathered that it’s ideal to replace the bulbs together to ensure consistent brightness – I guess the bulbs lose a little bit of intensity over time. So, I picked up a pair of new Philips D2S Xenon HID bulbs.

After installing them, everything looked great: 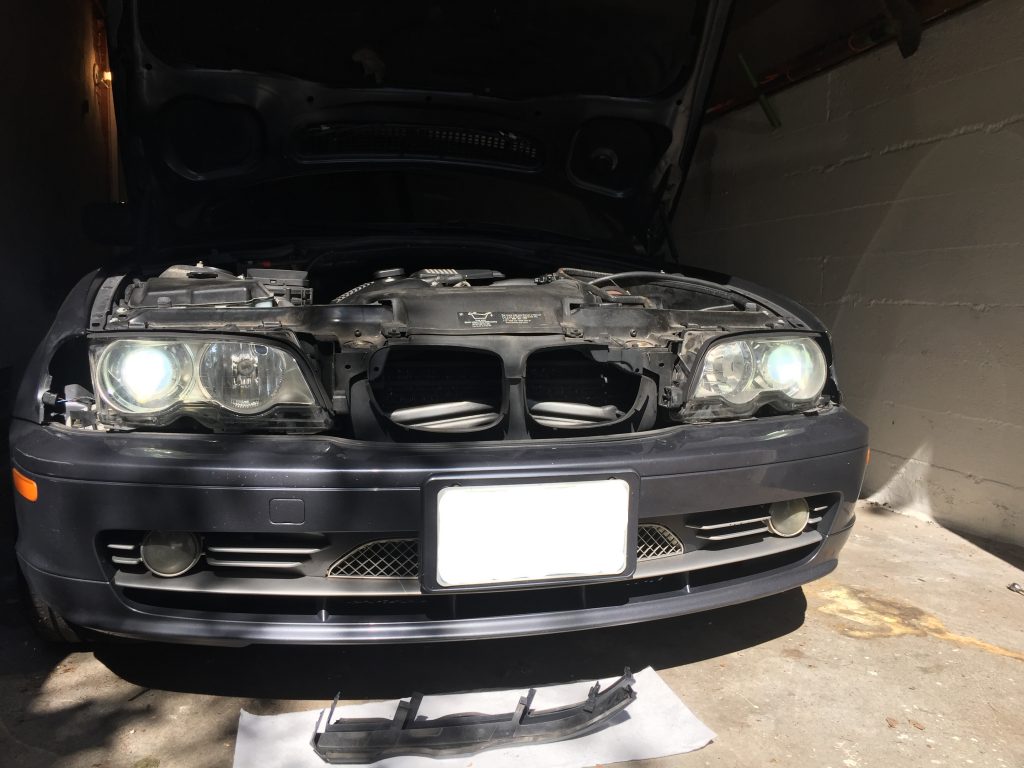 But then, as I was writing this post, I discovered that counterfeit bulbs are prevalent. I went to Philip’s web site to verify the authenticity of the bulbs. Although I had ordered both from Amazon, one of them registered as fake. But, I forgot on which side I placed each of the bulbs! Incredible! I tried to inspect the bulbs to discern for obvious signs of counterfeiting but nothing stood out. Reviewers on Amazon suggested that fake bulbs had caused them issues with the rest of the system, so I decided to return both and try again. Fortunately, Amazon’s return policy is extremely generous and I was able to return both bulbs. Replacements are on the way; pending authenticity verification, I’ll hopefully get these installed soon!

As a side note: A friend shared a helpful tip for re-installing the headlight assembly. There’s one screw that is particularly difficult to reach (the one Zach, from the video, uses a socket extension to reach). I don’t have a magnet in my socket set, so I was worried about dropping the screw into the ether. I used a small dab of liquid super glue on either side of the screw head, attached it to the socket, and let it dry. In my first couple attempts, one of the socket extensions released but left the socket attached. I removed the screw again and then wiggled it just enough so it could break free from the socket with a little force once it was screwed in. This did the trick, and I was able to reassemble without dropping the screw somewhere unreachable.

This site uses Akismet to reduce spam. Learn how your comment data is processed.